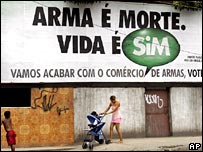 As a geek I’ve got a soft spot for Brazil, which is one of a handful of third-world countries which is at the forefront of open-source software adoption. This is mostly due to most people being unable to afford American proprietary software, and the country being powerful enough to stand on its own two feet. Even so, I wasn’t expecting them to vote so dramatically to reject an outright ban on firearms sales in a referendum as happened on Sunday. As you can see on the poster, the pro-ban slogan was “Arma é Morte, Vida é Sim”, meaning “Arms are death, life is Yes”, meaning to vote in favour. (Hat tip: Samizdata.)

This is the typical rhetoric of the gun control lobby which is at work even today, pushing for a ban on guns of one kind or another, invariably the kind involved in the most recent tragedy. In the 1990s it was handguns, now it’s airguns. I remember in the wake of the Dunblane massacre, even charitable donations were diverted from people in real need to the Dunblane “aid” funds. In the case of Brazil, the reason the ban was rejected was that people need guns for personal security, and even (perhaps especially) in the shantytowns that the police “are never going to arrive in time and if they do, they may kill you”.

The problem is that if you take weapons out of the hands of decent people, you leave them only as well-defended against criminals, who will not let themselves be deprived of theirs, as the police are willing to make them. If the police are corrupt or racist, they won’t defend people they don’t like. On an Islamic email forum to which I subscribe, a black American convert told us how her family had used their weapons to fight the Ku Klux Klan, because obviously the police wouldn’t fight that battle for them. More recently, the state in Gujarat proved itself to be in the hold of the Sangh Parivar / BJP mafia.

Decent people often don’t feel safe in the streets. In places where knives are banned (that is, most places), it’s common for women to carry hairspray in order to combat attackers. Yet every time someone gets shot or stabbed, the cry is to ratchet up the sentences for carrying a knife - whatever the intent, even if there was none (as in the case of Nicky Samengo Turner, who was prosecuted for having a security baton in his car, having put it there to keep it away from his children, and a multi-tool with a locking blade. Laws like these are a charter for the “little Hitlers” mentioned in yesterday’s article and for “planting” by the malicious or corrupt.

In our society, it’s quite lawful to go out in the street with a dog, which unlike a knife isn’t genuinely under the owner’s control. They can, and do, attack people off their own bat. I’ve had a big dog run after me while I was on my bike (alhamdu lillah, I managed to outrun it); they also attack other dogs, including guide dogs, and farm animals. If you can’t get locked up for having a weapon you can’t control, what’s the point of locking someone up for carrying one they can? (On the other hand, if they carry a knife and do a robbery, they should be done for carrying a weapon with intent. That’s different.)

But the issue here isn’t carrying anyway, but owning, and the bottom line is that sometimes people do need weapons to defend their property. You can’t always call the police, especially if burglars cut your phone line and you don’t have a mobile. Sometimes you need to put up a prompt response by showing, if not actually using, force. That’s not something the idiot media wants people to see, but the people in Brazil knew it. Good for them.