Who brought this lot out? 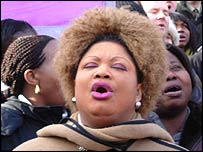 There is an interesting “sketch” piece on the BBC’s website about this afternoon’s rally outside Parliament against the proposed “religious hatred” law. (To be honest, I was considering going as I finished work around 2:30pm, but for various reasons I decided against it, and sort of wish I had gone now.) The article is called Singing from the same hymn sheet, and gives a strange image of those involved: a mixture of evangelical Christians and atheists who are worried about their criticisms of Islam (in particular) laying them open to prosecution. (More: Osama Saeed.)

Another picture on the same page shows rather more of the protestors, who are not as predominantly black as is suggested by the picture above. They were joined by two politicians of the Democratic Unionist Party - AKA the Ian Paisley Party - from Northern Ireland, one of whom is pictured “leading a rendition of Amazing Grace”. The evangelical contingent comes out with some rather strange slogans for a demonstration against the outlawing of what some people have taken to calling incitement to religious hatred:

Indeed, the beltway opposite Parliament seemed to have transformed into a gospel choir stall in the shadow of Westminster Abbey.

“Stand up, stand up for Jesus, ye soldiers of the cross; Lift high His royal banner, it must not suffer loss,” they sang.

And with it, a sea of banners from about 400 protesters were lifted high, bearing such slogans as: “the blood of Jesus Christ”, “the holy spirit and fire” and “woe unto them that decree unrighteous decrees”.

And this is what the DUP contingent had to contribute:

Democratic Unionist MP Sammy Wilson proclaimed to cheers and hallelujahs how Christianity had spanned 2,000 years and did not need protection from Tony Blair or his new legislation.

“People are queuing up to use this legislation to stop people preaching what they want,” he said.

His DUP colleague Willie McCrea declared: “I do not care what man says, I am not ashamed of the Gospel of Christ.”

The article doesn’t explain from what religious organisation the black evangelicals came from. I say this because areas of south London with a high African presence have a large number of fringe churches with names which would sound very strange to anyone from a traditionally Christian background. Many of them are “charismatic”, meaning heavily focussed around a preacher, and some have outlandish beliefs, such as obsessions with demons or witchcraft. Of course, this type of religion is sometimes known to attract whites as well, but it is particularly prevalent among people from sub-Saharan Africa. Given the hostility which exists between Christians and Muslims in some parts of Africa, I suspect that protection for Christian preaching is not the motive for their participation, or at least, its organisation.

By the way, you can read the bill for yourself at the Parliament website. “Religious hatred” is the term: its definition, which is the important bit, is “hatred against a group of persons defined by reference to religious belief or lack of religious belief”. So you can’t read anything you like into “religious hatred” itself, such as hatred founded on religion, because religious hatred is specifically defined as something else. In addition, the Commons narrowly approved amendments passed by the House of Lords restricting the criminalised speech to the threatening, rather than merely abusive or insulting, something I consider welcome; it must, however, be noted that insults to people’s religions are commonly used as means of stirring up hostility to said people - witness the continual attacks on the marriages of the Prophet, sall’ Allahu ‘alaihi wa sallam. I fail to see why people are so opposed to the extending of racial hatred to cover hostility based on religion; the alliance of traditionally anti-religious secularists, African evangelicals and notoriously reactionary Northern Irish Protestants suggests that it’s not just about free speech.