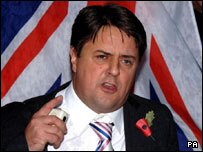 The BBC reports that the leader of the British Nazi Party, Nick “well-directed boots and fists” Griffin, and one of his lieutenants, Mark Collett, have been cleared of inciting racial hatred at their retrial in Leeds. The charges stem from words Griffin was secretly filmed using in a speech given in nearby Keighley in 2004, which was broadcast in a BBC documentary, The Secret Agent. Since the law is not stringent enough to get such brazen incitement to communal hostility as those Griffin used, the Chancellor Gordon Brown understandably wants to tighten it up. Griffin himself celebrated his acquittal with a tirade against the BBC, calling them “cockroaches” and “a politically correct, politically biased organisation which has wasted licence-fee payers’ money to bring two people in a legal, democratic, peaceful party to court over speaking nothing more than the truth”.

It’s worth reminding ourselves of what the offending words were:

Unaware that one of his new recruits at the Reservoir Tavern was undercover BBC reporter Jason Gwynne, the court heard that Mr Griffin told his audience: “These attacks are going to continue, because that is what the Qur’an says. The bastards that are in that gang, they are in prison so the public think it’s all over.

“Their ‘good book’ tells them that that’s acceptable. If you doubt it, go and buy a copy and you will find verse after verse saying you can take any woman you want as long as they’re not Muslim. These 18, 19 and 25-year-old Asian Muslims are seducing and raping white girls in this town right now.”

This wicked, vicious faith has expanded from a handful of cranky lunatics about 1,300 years ago and it’s now sweeping country after country before it, all over the world. And if you read that book (the Qur’an), you’ll find that that’s what they want. If you doubt it, go and buy a copy and you will find verse after verse and you can take any woman you want as long as it’s not Muslim women.

It is, of course, common when racists want to demonise a group of people that they characterise them as given to sexual licentiousness and rape; both Jews and blacks have been stereotyped in this way in the past. In Keighley there were gangs who were grooming young girls for pornography and prostitution, but both Asians and whites were involved. According to Searchlight, the BNP have a history of making race issues out of straightforward criminal matters which have nothing to do with race, such as suggesting that rapes or murders were the work of blacks or Asians rather than their actual white culprits.

According to the Public Order Act 1986, a person can be found guilty of incitement to racial hatred if he uses “threatening, abusive or insulting words or behaviour”, or displays material containing such words, if he intends to incite racial hatred or if this is the likely result. In the case of religious hatred, the words covered are only those which are threatening, but Griffin clearly mentioned Asians, which is of course a racial denominator. The words used were both abusive and insulting, but if the law needs changing, it is to take into account the uttering of falsehoods about a racial or religious group, as it is a time-honoured tactic of racists and other demagogues.