The prejudicial coverage of the Yeates murder 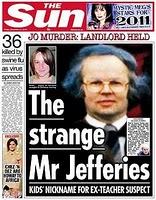 I must say I never had much faith in it to begin with, but this article exposes some of the prejudicial coverage of the arrest of Jo Yeates’s landlord for her murder last month. I must say I had hoped they had their man, but if they don’t, they need to find the one who really did the killing because locking up an innocent man is no good to anyone, least of all to whoever the real murderer might kill next.

As the article concludes:

The presumption of innocence is a vital part of the British justice system and is something that certain newspapers claim to hold dear, and rightly so. Yet almost all of them, from the Daily Mail and The Sun to the Daily Mirror and the Telegraph, have treated him as if he were guilty.

His past and his present have been dug up and paraded around for all to see as putative proof that Mr Jefferies is, if not guilty of murder, at least guilty of being “strange”.

More from Joanne and Enemies of Reason.