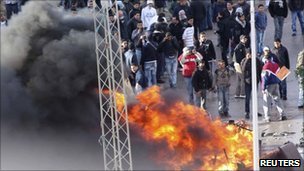 OK, my title isn’t exactly original — it was a nickname for the Comoros islands in the Indian Ocean, which for some time had coups on a fairly regular basis (often engineered by the French). However, some people seem to be entertaining the possibility that there is going to be, or already has been, a coup in Tunisia.

As it turns out, the rumours are just rumours, but as this article points out, it was mixed with a lot of hubris about how the mainstream media looked away as a momentous event was reported by ordinary people on Twitter. As it turns out, the person who started all the fuss admitted they’d made a mistake, or their source had, and there had been no coup.

It’s not the first time I’ve heard rumours of a coup on Twitter — at the time of the outrage over the Egyptians preventing Palestinians escape from Gaza or get into Gaza from Egypt, someone passed around a text message saying that the Egyptian army was going to stage a coup against Mubarak. Of course, the coup never happened. Why would a group of officers planning a coup against any government pass rumours about the operation beforehand? If they did that, they stand a much better chance of getting caught and thrown in jail, or executed.

If there is a coup, you’ll know when it’s happened, because it will be on the news and the new president will make an announcement on state TV. Rarely do they produce positive political change; they release a few political prisoners, make a show of “a new start” and perhaps put on a bit of religious piety, then go back to the old ways again within a matter of months. That’s what happened when the current president of Tunisia came to power.