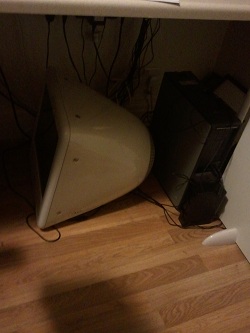 So, Steve Jobs, the man who invented the Mac, the NeXT box and then merged the two together, is dead. Actually I’m sure a few people helped Jobs on the way, like actual programmers and graphic designers and, well, you get it, but the tributes I heard on the radio today were beyond ridiculous: there was a guy called Geoffrey Robertson, I think, interviewed by Jeremy Vine on Radio 2, who claimed that what Jesus was to Christianity, Steve Jobs was to “tomorrow”; a letter-writer to the same programme opined that vintage Macs can be found in design museums but vintage PCs can only be found in skips; and finally, the line that three apples have changed the world: the one Eve ate, the one that fell on Isaac Newton’s head, and the one Steve Jobs invented.

I’ve got a lot of disabled friends who really rave about Macs and other Apple products: Mac OS has screen-reading software built in (not an unreliable, expensive extra as it is on Windows) and their handheld devices can be used (with the help of special software, which is extra) as speaking devices for people who cannot speak themselves (known as an AAC). There are other cases of disability where the Mac still doesn’t shine: Windows Vista and 7 have speech recognition built in (so, kind of the opposite to the Mac in that sense) and, although Dragon Naturally Speaking is the product most used for this (by those who cannot use a keyboard, such as quadriplegics), some have reported that Windows’ own speech recognition is good. Others have reported to me that they cannot use a touch-screen phone or PDA; they require an actual keypad, as on the Blackberry. and no Apple device has one.

I bought a Mac in 2004. At the time, they were good value for money, although I had a bit more freedom than I ever have had since as a trust fund (not huge, and sadly less than had been invested in it) had matured. For much of the time since then, Mac hardware has consisted of standard commodity hardware crammed into a fancy box, with a specification which fails to jusify the cost of the unit; in particular, memory and hard drive space were often low by comparison with PCs of the same price. To upgrade memory at purchase, you would have to pay twice as much as you would pay at Crucial or Kingston. For example, an upgrade for the current i5 Mac Mini from 2Gb to 8Gb currently costs £240 from Apple, while the memory itself costs £111.85, including VAT and delivery, from the Kingston partner SMC. I have heard various justifications for why the kit itself is so expensive (including “aluminium unibody casing” and the “Apple ecosystem”), but that is simply a rip-off.

Apple simply do not care about people who are on a budget and need a computer that works for a reasonable price. (This includes, for example, many of the Unix hackers who work on the BSD underpinnings of Mac OS X.) Jobs was on record as saying he had not come across a $500 PC that was not a piece of junk; it may have been junk to him, not coming in one of his fancy aluminium cases, but no doubt worked and had more memory and storage than a much more expensive Mac, and could be expanded, if need be, the case opened with the aid of a screwdriver rather than a decorator’s spatula. For me, the fancy box was nowhere near as important as what was inside it, and that’s why I haven’t bought a Mac since 2004 (and I once wrote that I would buy another Mac when it came to upgrading that one, if they were still a viable option). Mac ownership has become rather like an exclusive club, a bit like a gang of schoolkids at a posh school which shuts out the “poor kid”. Since I’m not rich enough to join the gang, am I going to mourn its leader? No, I’m not.