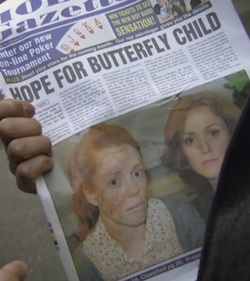 Last night BBC1’s Holby City aired a quite ridiculous storyline in which a 16-year-old girl with the skin condition Epidermolysis Bullosa (EB) received a bone-marrow transplant from her sister, which is supposed to cure the condition. I had always thought EB was incurable (and if it could be cured this way, the EB charity Debra would say this on their website as there would be a great deal of interest), so I tweeted a friend who has the condition, and she told me the storyline was nonsense, that the treatment on display had killed babies with EB in the USA, and that she was refusing to watch it. Debra has a page about the storyline here:

Has BMT been carried out in patients with EB before?

However, overall results are mixed and, sadly, there is a significant risk of death. Consequently, such trials are not planned currently in the UK.

The episode was titled “Butterflies”, and although in the first few minutes Dr Griffin presents Henryk Hanssen with a newspaper front page reading “Hope for Butterfly Child”, the significance of this reference was never explained (it refers to the fragility of the affected person’s skin, which can tear and blister very easily from friction or pressure). Hanssen and Griffin have some apprehension about the exploitative nature of the media coverage and the experimental nature of the procedure, as well as the patient’s enlarged liver, but agree to proceed with “extreme caution”. The girl with EB, named Cindy, had a sister who was a year younger, who decided she did not want to donate her bone marrow and explained that her sister’s condition had completely dominated their lives, with at one point her bicycle being taken away because her sister could not ride it. Dr Griffin later managed to persuade her to give her consent by telling her that they were very fortunate to have an exact tissue match and that, if successful, the treatment could change her sister’s life (this after her mother said she had signed the consent form and that her underage daughter’s consent was of no significance). The operation goes ahead, but we do not find out whether it was successful; we do not see Cindy after she goes to theatre, and Griffin tells her mother that the operation is not a quick fix, which might open the possibility for future appearances, but none of the family are in the next episode.

I’ve raised concerns about ridiculous storylines in this strand before — Holby’s Saturday evening sister programme Casualty ran a storyline in which a man who had been diagnosed with ME was shown beating his wife (he was later re-diagnosed with muscular dystrophy, which was a curious diagnosis in itself as you don’t just have muscular dystrophy, you have one of several dozen types of it). I objected to the ME storyline because it is more common for sufferers (who are more likely to be female) to be abused by medical professionals of both sexes, rather than a male sufferer to abuse his female partner, who was a nurse. It was a lot like having one programme on domestic violence in several years, and it featuring a violent wife rather than a violent husband. That time, my complaint was brushed off on the grounds that medical accuracy had sometimes to be sacrificed for the sake of the drama.

This storyline was very clearly inaccurate, presenting a treatment which is very much in its early stages and which British doctors have refused to offer because of its experimental, high-risk nature, as if it offered a very significant hope in curing EB now (or at least checking it, as damage that has already been done cannot be undone). Is there no limit to this organisation’s “artistic licence”? People die of complications from this disease every year, and many of those who have it (particularly if severely), especially if they have many friends with it (which they are more likely to nowadays because of social networks) will have known people who have died. There are many ways a story like this could have been told — there are other conditions which require a bone-marrow transplant (or an organ donation, even) to cure them, so why could one of them not have been used, rather than pretending that something that, right now, doesn’t work, does, and that something will radically improve a patient’s life when it is more likely to kill them?