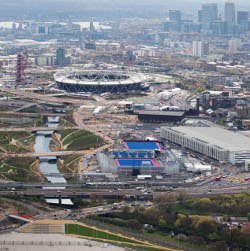 As the British team in the London Olympics surpassed its previous gold medal record (its all-time record from 1908 is unbeaten, but that was when the rules were very different from now), politicians started to beat the drum about sport in schools and how our supposed underachievement in sports is down to teachers not encouraging competitive sport in schools. Others have countered that in fact, plenty of our gold medal winners did go to state schools including Jessica Ennis, Mo Farah, Bradley Wiggins and Andy Murray (Sir Steve Redgrave also went to a secondary modern school in Buckinghamshire), even if the private sector had a very good showing. I believe the government are using the Olympics to promote an old-fashioned model of school sport which overemphasises physical achievement and is harmful to many children, particularly at secondary school. (More: Same Difference.)

I’ve actually enjoyed the Olympics and like many people have noticed the community spirit the games (and the British achievements) have encouraged. While the Olympics are a hugely expensive event that perhaps could do with scaling down a bit, and including fewer well-financed professional sports like football, one of its benefits is that there is something in it for almost everyone. The only other sporting event with anything like the same profile is the football World Cup, an event which features only one sport, only men and only able-bodied participants and the UK teams are pretty mediocre at the game, in large part because the top-level game is awash with money which is used to hire players from around the world rather than to nurture local talent. Many British people hate the game and others think England is entitled to win it because ‘we invented it’, hence the revolving door of England team managers, and the atmosphere around grounds and pubs during and after football matches can often not be described as good-natured. A writer in the Daily Telegraph said that the Olympics “feels as good as 1966” (when England last won the football World Cup), but watching people win doing things you enjoy, like cycling and swimming, is vastly more satisfying than when they are doing something you do not care for.

Whether Britain had done well or done badly, politicians would have used the opportunity to attack the supposed “all must have prizes” culture in school sport. And Britain has done very well: our team is third in the medal table at the time of writing, behind only the USA and China, both of which have populations much greater than ours — Germany and France, both developed economies with populations similar to ours, have won eight golds each (and their respective total medal tallies are less than ours also). This cannot solely be put down to the ‘home advantage’ although having a familiar climate no doubt did benefit the British athletes, not that Britain is the only country with a temperate climate. Someone must be investing in British athletes such that they win the most gold medals of any country of a similar size. Not all of the sports we have achieved in are even taught in schools to a large extent; many of them will have trained in their own time, possibly with their own money, rather than having been forced to do them at school.

I also bristle whenever I hear the lazy cliché about “all must have prizes” — the purpose of schools is to educate the mind, not produce sportspeople out of those who had no interest or aptitude for it. Granted, they should make sure that children remain physically fit and require them to take part in some kind of physical activity, but competitive sport has no interest for many and to over-emphasise it will cause harm to late developers and humiliate those without the aptitude for what are, in and of themselves, inconsequential activities. It is already well-known that among boys especially, those who are seen as ‘swots’ and ‘boffins’ are not as popular as those who are good at sport, when sport is not an achievable life goal for the majority and it is other activities which will enable them to make a living and make a serious difference to mankind. Let’s face it, no serious scientific discovery was made by people kicking a ball into a net or coming first in a running race, and the cure for cancer or AIDS, if there ever is one, will not be found that way either. We should get this into perspective: sport is just entertainment. True, revenues from sport can subsidise medical research or various kinds of philanthropy, but these activities shouldn’t be over-emphasised to people who already need a great deal of encouragement to do other things.

Sport in itself will not fix the economy either, and one of the most shameful aspects of these games is that local businesses have often not been allowed to benefit from the surge of people into their area. In one case, a railway station close to the Olympic Park, which serves a busy town centre, was set to be closed for the duration, and although this decision was reversed following a public campaign, the timetables had already been printed and so the public was still given the impression that the station was closed. A friend of mine told me that in Weymouth, many of the roads leading to the public stands for spectators at the sailing event were closed, so that spectators could not access local shops. I also learned that in Greenwich, games goers were held behind barriers that prevented easy access to local market stalls, with the effect that they experienced reduced footfall at a time when there were actually more people in the area than there is normally. It is, of course, the British tax payer, and particularly the London tax payer, that was the biggest sponsor to the Olympics, and were expected to tolerate the disruption and forbidden from cashing in on the games, yet often found that the games they had invested in turned out to be bad for business. There’s no glory in running a small shop or a market stall, yet they are essential to neighbourhoods and will be long after the athletes have gone home. It is fine to admire the achievements of our sporting greats, but we should remember that the great cannot survive without the ordinary.