What does it take to get locked up in Britain? 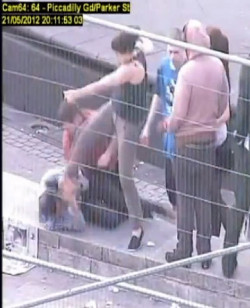 A woman who took part with three men in a violent group attack on an Asian man, in which she kicked him in the head while calling him a “f**king Paki”, has been given a suspended sentence and ordered to attend “a programme for women offenders”. The other participants were each given a one-year suspended sentence along with a community order, despite one of them being known not to have complied with previous orders. The woman, Amanda Lowe, has four convictions from the past six years while the other three have 21 previous convictions between them, and the judge warned them that another offence would result in a prison sentence. He also warned her that her behaviour was a bad influence on her children:

‘The damage you are doing to your children - there at the time and seeing you drunk, the risk you put them at - is disgraceful.

‘Somebody who behaves like that when they are drunk I would think you have to keep a very careful eye on as a mother.

‘That damage starts from when they are tiny.

It seems pretty mystifying that someone with a record of violence who took part in a group attack on a defenceless man should be let off a prison sentence because of the “impact on her children” her going to prison could have. I would say that a mother who becomes drunk and then indulges in gratuitous violence in front of her children, leaving them aside to go and kick someone in the head, and exposing them to the company of violent men, should really not be in charge of children, and being separated from her could do them a world of good. One of the children is only four months old, which means she is young enough to be removed from their environment with little damage. One of the three men convicted with her is the baby’s father.

This wasn’t a racially motivated attack, but was certainly racially aggravated — it started after Lowe shouted racist abuse at the victim, Khumar Nisar, as he walked past her and her friends on the way home from work. Nisar told Lowe’s boyfriend, Wesley Earls, to “control his woman”, whereupon Earls punched him in the face and Lowe and the other two joined in. The law should make it perfectly clear that it is not acceptable to respond to insults with violence, and any group or mob attack on an individual (or much smaller group), whatever the motive (hate, insult, theft), should result in prison for the attackers, and more jail time if the victim’s race or disability is an issue. The judge told the woman that this could have been a care case (i.e. she might have lost her children); it is of greater importance that it could have been a murder.