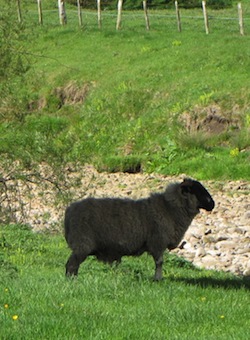 The Lancashire Council of Mosques has advised Muslim parents in the county to boycott the new ‘halaal’ dinners being offered to their children by the local council in the schools because the meat comes from animals which were stunned before slaughter (press release here in PDF). The council previously had an arrangement with another supplier, which it terminated after an inspection, but council leader Geoff Driver insisted that the council would not supply meat from non-stunned animals and that the suppliers were accredited by the same body that certified meat for the Olympics last year.

In fact, this claim may not be entirely true — according to Robert Booth in the Guardian, non-stunned meat was served in packs to at least some athletes from Muslim countries at the Olympics:

Locog will also provide special food packs for Muslim athletes to break fast if they are competing at venues at dusk. For the first time some food served at an Olympics will adhere to standards set by the European Halal Development Agency. For meat labelled as halal, there will be no mechanical slaughter, the animal will not be stunned and a Muslim slaughterman will declare the animal has been killed in the name of Allah.

“We have been co-ordinating with Locog and the IOC for the past five years on this and London has said they will provide halal food during breakfast and late suppers,” said Dr Rashed al-Heraiwel, the secretary general of the Saudi Arabian Olympic committee. “There will be meat and chicken and it will be slaughtered according to Islamic law.”

It is true that Muslims in many countries do not regard stunning as something that invalidates halaal slaughter, as long as it is only an electric shock, not a captive bolt, and that the animal is still alive when its throat is cut. The reasoning is that the animal must not have been injured prior to slaughter — it must be a healthy animal. However, the Muslims of Lancashire are the Muslims of Lancashire, not those of Egypt or Malaysia or anywhere else, and they mostly come from parts of the world where stunning was not practised and is regarded as forbidden. The Halaal Monitoring Committee takes this position, and the Lancashire Council of Mosques equates halaal with HMC approved as far as this country is concerned. Another well-known body, the Halal Food Authority (which has connections to the Muslim Parliament founded in the late 1980s, although that is now a mere shadow of its old self) permits electric stunning but forbids anything stronger, and prefers non-stunned meat, so in other words HFA meat may or may not be pre-stunned.

Driver’s reasoning is essentially that if the meat served at the Olympics is good enough for Olympic athletes (and, perhaps, scores of Muslim tourists) then Muslims in Lancashire demanding ‘special’ halaal meat must just be making a fuss about nothing. However, the Muslim community is vast, there are different traditions and the differences in outward practice are few but often highly significant to those they affect. There is also the subtext that if it’s good enough for these athletes, it’s good enough for anyone. Sorry, but we’re not inferior to athletes just because we can’t put on a sprint or some other ultimately trivial physical feat for an audience, and neither are our children. Quite apart from being factually baseless, it’s a rather insulting suggestion.