What’s an imam to do? 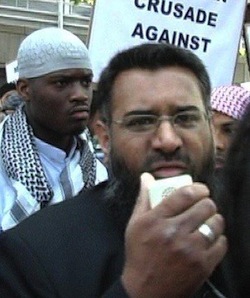 Last Friday at 1pm, Jeremy Vine had a slot about Islam and Muslims on his talk show on BBC Radio 2 — nice timing. This was, of course, prompted by the brutal murder of a soldier in Woolwich last Wednesday. Who should turn up on his show this time than Taj Hargey, yet again, as well as Usama Hasan from the Quilliam Foundation. The former spouted his usual rubbish, blaming “mullahs” who teach standard Islamic beliefs for the deranged behaviour of the two men who were members of al-Muhajiroun but struck out on their own. Usama Hasan told a slightly more interesting story about how he fought in the jihad in Afghanistan in the 1980s before beginning his “path to moderate Islam” after 9/11. There were, of course, no other guests representing the Muslim community. The programme can be found here and the slot starts 1hr 10mins in.

Hargey started by blaming the “three M’s of our community, the mullahs, the madrassahs and the mosques”, for giving a “drip-drip” message that “it’s us and them, it’s Muslims against kafirs, Muslims against unbelievers”, and that these two fanatics were obviously getting this message “from the mullahs” and “from all these extremist preachers” on the Internet. He claimed,

“We need to condemn all these mullahs because even here in Britain we have our local variants who spout the same nonsense, the same rubbish, about them and us, and only Muslims are going to Heaven and everyone else is going to Hell.”

Vine then mentioned people like Abu Hamza and Anjum Choudhary, who “may enjoy winding people up” but have a profound effect on their followers. Hargey said that Choudhary was “a mullah of a sort”, who went round claiming that there would never be peace or co-existence, only a “covenant of security which is a nonsense, it doesn’t exist in Islam”. He then claimed that it was “this sort of toxic nonsense that comes from the Wahhabis, the Salafis, from Saudi Arabia, Afghanistan, and we should stop this imported ideology coming here under the guise of the so-called mullahs who project this”. He then mentioned Yusuf al-Qaradawi (who isn’t a “salafi” at all, and neither is he Saudi; rather he is an Egyptian trained at al-Azhar and lives in Qatar, which has developed an entirely different culture from Saudi Arabia) and accused him of preaching co-existence with Christians but not with Jews, “and we do not need this kind of message in this multicultural, pluralistic society”.

As ever, Hargey’s claims are full of distortions. First, although extremists go to some mainstream mosques (some of them will refuse to attend Bareilawi mosques, but will attend any other), they do not get the inspiration to become extremist from the preachers there, but from other sources including people they meet and printed literature handed out at the mosque. Increasingly, the printed literature is replaced by online literature although this can easily be printed out and handed out. Mosque sermons are often about everyday, bread-and-butter religious topics such as basic moral teaching, religious doctrine, and faith topics such as the importance of fear and trust in God. The claim that it’s just a drip-drip of “stay away from the unbelievers, they are all going to Hell” is preposterous. Of course, nobody can go to every single mosque so if I can say I’ve heard the sermons at Croydon mosque or Kingston mosque and they are not like that, he can say I haven’t heard those at another mosque; the same if I have been to 10, he will tell me the 11th is as he describes.

As is fairly well-known, there were a few mosques controlled by the extremists until about 2003, and a small number of preachers who hired out halls for Friday prayers, including Abdullah Faisal and Abu Qatada. However, most of these events no longer run as their leaders have left the country or are in prison, or both. Some of their tapes and writing are still available, but they still lack the reach they had when they were able to preach in person in the UK. In addition, there has been much discussion among Muslims since then and the appeal of these ideas, including conspiracy theories about 9/11, to mainstream Muslims has diminished somewhat.

The notion that disbelievers go to Hell is not a Wahhabi or Saudi import and neither is it related to extremism or terrorism. That is a complete red herring. The ideological foundation of extremism is essentially Salafi-jihadism or Combatant Salafism, which emerged out of the Afghan jihad of the 1980s (specifically the Arab element that participated in it), as well as offshoots of the Muslim Brotherhood in Egypt and the GIA in Algeria. These groups broadly coalesced around Osama bin Laden and Ayman Zawahiri in the 1990s and formed what has been described as “the international, travelling Salafi army”, which became known not only for extreme and violent attacks on any perceived enemy, Muslim or otherwise, but also for wrecking the efforts of other Muslims to build Islamic states, such as in Afghanistan and Chechnya, by using them as bases to launch attacks for their own ends. Muslims know very well that al-Qa’ida intended to rule Muslims, not serve them, and became aware that some of them (as in Algeria) were in fact government agents in fake beards. I have gained the impression that some Muslims also are willing to support the likes of the Taliban in a ‘far-off’ country like Afghanistan but less so when they encroach on a country they have relatives in and may aspire to move back to, such as Pakistan.

On both this issue and the issue of grooming, Hargey is feeding misconceptions of what an imam is and what he can do. He is not paid by the government or the local council; he is paid either by the local community or a charity, which often receives overseas (usually Gulf) funding, so outsiders have no right to expect them to issue sermons about what concerns them. An imam is not a military general who can give orders and expect them to be obeyed. He is not responsible for what the people who pray behind him do, unless he actually tells them to do it or tells them it is permissible when it is not. He is not a pope or an infallible spiritual leader whose word is religious (let alone secular) law. He is able to give advice and spiritual guidance but he cannot make his community do anything.

On both of these issues, it is inconceivable that a sermon, or several, would make a huge amount of difference. In the case of grooming, the men were part of a criminal subculture and if they attended mosques or had ever read the most basic book on Islam, they would have known that everything they did was wrong anyway. For an imam to give a sermon to the effect that Muslims shouldn’t regard non-Muslim women or women in skimpy dresses as trash, as Hargey might desire (and as if Muslims in general believe that anyway), would have made no difference, because their crimes were against young girls who they groomed from childhood, not adult women. As for the extremists, although they may attend a mosque for the Friday prayer, they may not believe what the imam says about what he is doing or the group he belongs to. They know that a lot of imams disapprove of them and their campaign, and do it anyway because they know the imam is from a different school of thought to them (or unable to speak out because of money, mosque committee politics, or some such constraint) and simply believe he is wrong. (That is not even counting the imams they will not pray behind.)

Muslim response to the Woolwich atrocity has been to condemn it outright, with the sole exception, to my knowledge, of the al-Muhajiroun remnants. That’s all they are able to do; they do not have the power to ‘root out’ extremists (as a Muslim I know said we should do on Facebook the other day), many of whom are already known to the security services and none of whom make their plans known to the Muslim community until they carry them out. We cannot run to the police every time we hear some guy come out with an “extreme” view or justify terrorism, or an imam voice an illiberal opinion during a sermon. In today’s Mail on Sunday, it was claimed that the government are setting up a new counter-extremism task force so as to stop extremists using “schools, colleges, prisons and mosques to spread their ‘poison’”, as well as holding mosque committees responsible for their choice of imams. It is noticeable which group is being exempt from responsibility for spreading this ‘poison’ and exaggerating the profile of the tiny group of extremists that still preaches in public: the press.

Blaming mosques, committees or “mullahs” is another way of blaming Muslims in general for the misdeeds of a handful, and I have to say that my non-Muslim friends on social media have been brilliant at avoiding this trap, but both politicians and the media want to score points and responsible policy and reporting does not achieve that — “bold” stances do. The fact is that they know where the extremists and the terrorist plotters are, and who they are, better than the community do. It’s not about an “us and them” attitude, it’s about the remnants of an organised campaign that occasionally manage flourishes of brutality (less frequently than they manage to get locked up). There’s no need for new snooping powers or banning groups that aren’t linked to terrorism but which they can accuse of “promoting division and hatred”, an easy cover for political repression, and not just against Muslims but against any political protests (anti-Apartheid campaigners in South Africa were commonly charged with “inflaming racial hatred”). This attack was not a “new front” but one of the last roars of a dying dinosaur.