Rapists to Rio? Are we that desperate? 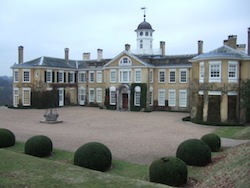 This past week, a man from Surrey was given a non-custodial sentence for a series of serious sexual assaults against a 12-year-old girl in December 2012. Adam Hulin plied the young girl, whose age he knew from having asked which school year she was in on Facebook, with vodka, drove her to the grounds of Polesden Lacey (a stately home just outside Leatherhead, pictured right) and performed two sex acts on her while she was drunk. He denied having sexual intercourse with her (i.e. raping her, as she was 12 and had had several shots of vodka which she was presumably unaccustomed to) and the judge dismissed the jury to hear this aspect of the case alone. Hulin is described as “a talented middle-distance runner with the Aldershot, Farnham and District club team” and has a promising future ahead of him; he has been accepted at a university to study marketing from next September. The judge accepted his claim that he believed the girl was 16 (note: nobody is still in year 7 at age 16) and said he “certainly wouldn’t want to do anything which would prejudice his future career”.

After the infamous Steubenville rape case in Ohio, I thought something like this could not happen in this country because our sport culture is different, and sportsmen are nowhere near as valuable to their communities (schools in particular) here as in the USA. That case was a gang rape that was video’d and the footage distributed, while the girl in this case was 12, not 16. I am not sure if being a runner with that team means he is an Olympic hopeful, but even if he is, we should not be so desperate for Olympic glory that we will send a man convicted of sexually assaulting a young girl to Rio, or even to the Olympics after that. And it’s a fact of life that when you commit a serious crime and get caught, it will “prejudice your future” and if that means you lose your chance for a shot at a medal than so be it. Just ask Gavin Grant or Ched Evans. Young people with promising futures who were studnets have been jailed for a year for throwing missiles at a Starbuck’s café during a protest.

The news reports about the case are sketchy, because the prosecution claimed that Hulin found out about the girl’s age by asking her about which year she was in, while the judge later accepted Hulin’s claim that she lied about her age and he believed her. He also claimed that Hulin believed he was engaging in “regular sexual activity” and the rape charge (which was allowed to lie on file, so there is no verdict on it at the moment) would not have been brought in any case if the girl had been just two months older, as her 13th birthday was in February 2013. The problem is that men do not normally ply women with large amounts of vodka and disguise its taste in a soft drink. Her reported behaviour, like being afraid of the taste of vodka, is not that of a 16-year-old and these should have raised alarm bells even if she looked a bit older than 12. The liberal use of alcohol and his taking her to a remote location suggests that his behaviour was premeditated.

While it may be true that until recently, a sexual act involving a 12-year-old that the younger person agreed to would not have been classed as rape, it would certainly have been illegal for an 18-year-old man to have sex with a 12-year-old girl and the age gap would have been sufficient for it to merit a custodial sentence. Certainly when I was at school, sixth-formers did not socialise with first-years (of either sex) and did not even have a huge amount of contact, and the idea of them mistaking one for someone almost his own age is quite laughable.

The judge’s remarks seem to reflect a “boys will be boys” attitude, as well as a perception that the man’s future is so much more important than the trauma he has inflicted on a young girl, who he perhaps regards as some kind of tart for getting in a man’s car, even though she was only 12. If this is how he behaves with any 12-year-old girl he can talk into getting into his car, how on earth can he be trusted on a university campus where there are plenty of young women, away from home for the first time, who it is quite legal to have sex with (and therefore he can say they did even if they didn’t)? There is a campaign to refer this to the attorney general to appeal this sentence, which I am joining: you can find a template letter and his address at the website Ending Victimisation. (You can also write to your MP, particularly if you live anywhere near where the attack took place, which is Bookham, near Leatherhead in Surrey.)