Discriminatory on every level 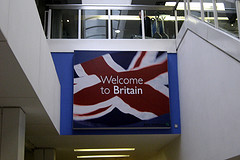 Last week a couple found out that they had been refused the right to settle in the UK and would have to split or resettle to the husband’s home country of South Africa (which is what they have decided to do). The reason was that the British wife’s income, at £19,786 for 2014 (she runs a craft-making business in Cornwall) was too low for a couple with a child; the British spouse must make £22,400, while if they do not have a child, the threshold is £18,600). This is ostensibly so that someone cannot bring in a spouse and expect the state to look after them, but this does not appear to have been the case here. A female friend of mine posted yesterday that the ruling was “inhumane and sexist”, the latter because it is more likely to discriminate against women because they tend to earn less money than men. However, it is discriminatory on every level you can think of. As the BBC article points out, average earnings in Cornwall and in much of northern England are around half of that of London and parts of the south-east, so someone on about average earnings for those regions would be more likely to fall below the threshold, while someone living in London is more likely to (although actually, there are plenty of people in London making around the threshold or less, and are much less likely to be able to afford a house on a single salary).

A further impediment to most British people on that kind of money being able to afford to bring a spouse over is that not many jobs will actually allow someone to spend time out of the country with them while building up their relationship enough to justify marrying them. Many people nowadays meet their overseas spouses on the Internet and have online chat and video conversations before travelling to each other’s countries. The latter part is expensive, and one or other spouse will have to take time off work. That’s easy enough if you can get enough casual work and don’t have to pay rent (or more than a nominal sum to one’s parents); if you’re actually doing a job that pays £19,000 a year, you are unlikely to be able to take more than your annual leave and expect to have a job to come back to (although much the same can be said of people earning more than that in nine-to-five jobs). That leaves another group of people: those who met while the foreign spouse was in this country for other reasons, such as as temporary work, studying or a holiday. If they are here long enough, they could have had a child born in this country, yet if the British partner fails to earn enough money, the other parent could be sent home and the child lose one of their parents, or have to move.

The rules are also racist in their intent: their purpose is to control the numbers of Muslims by preventing those from the northern ‘ghettoes’ from bringing spouses from the ‘village back home’ — and it is always assumed to be a village, never somewhere like Lahore, and among other assumptions is that they are illiterate (or at least under-educated) and the marriages are abusive. This behaviour has its problems, not least the persistence of Urdu and other South Asian languages as the main language of instruction in mosques, generation after generation of children born in the UK whose first language is not English, and the division between this longer-established community and more recent groups of immigrants (e.g. Somalis) and converts. However, media discussion of the ‘problems’ coming from Pakistani ‘ghettoes’ in Bradford and other northern towns neglects to mention discrimination against them, bad schools, and the fact that many of the industries that used to provide jobs to these communities have been destroyed. There has been agitation to curb this immigration for some years, often from pro-Israel elements and others concerned with ‘security’; Denmark raised the age for bringing a non-EU spouse into the country to 24, although the rules do not apply if you bring them to an EU country other than your own. Britain raised them to 21, but this was found to be against the Human Rights Act, forcing the government to set the age to 18, which is what led to this latest set of discriminatory rules.

Still, there are surely ways of ensuring that ill-educated spouses are not brought into already deprived communities without affecting the majority of the population, including Muslims without any links to these communities. For starters, countries where English is the majority language, or where there is a significant English-speaking minority, should be excluded from the rules (i.e. Canada, the USA, Australia, New Zealand and South Africa), because most English-speaking British people who find a spouse through an online relationship will find them in one of those countries, and the numbers are going to be much smaller than the number of EU migrants who come into the UK, many of whom do not speak good English (although their English is often better than our French, let alone Polish), because the expense of travelling to those places is much greater, and you do not need to be wealthy anymore to have access to the Internet. We should understand that allowing genuine spouses into the country so that a British person can live with their spouse in their country is not going to produce an unmanageable flood of immigrants; we should also understand that children need both parents and their lives should not be disrupted by constant moving and school-changing to solve a demographic problem that has nothing to do with them. It is not the children who chose their parents’ marital circumstances; it is their right to a family life that should predominate.

These rules are classist, Malthusian, and discriminatory on every level. They are cruel and they split up strong families for no good reason. They are made for a pre-digital, non-interconnected age where establishing contact with people in other countries was difficult. There is, and has long been, a tendency to force the British spouse to move away, supposedly because other countries (like the USA and Canada especially) have the room, and we don’t (and Australia does not; it had a 10-year drought, and there is no reason to suppose there will not be another). There is, of course, no impediment to rich foreigners coming in, spouse or no, buying up property at inflated prices and making Britain, and London especially, a more expensive place for everyone to live. We need fresh blood at every level, not just the top in terms of wealth. The immigration and citizenship laws are pretty much unique in maintaining outdated and discriminatory rules, such as not automatically allowing parents to pass on their citizenship, depending on age, sex, marital status and where the children were born. This must stop.