Pictures from the Devil’s Punch Bowl 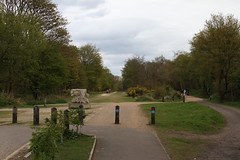 One of my favourite parts of being a truck driver used to be driving down to Portsmouth, as this involved driving through the Devil’s Punch Bowl in west Surrey: the road used to skirt the side of a natural amphitheatre, producing sudden and spectacular views — but also, an awful lot of slow traffic, so it was best not to hit it at peak times. Then in 2011 they opened a tunnel under the site and closed and demolished the old road, which is now a track open to pedestrians and cyclists. I drove out there earlier this afternoon and walked along the old road, taking pictures of both the scenery and the trees.

I mostly kept to the old road, most of which is now a dirt track; heather was planted along the path not long after the old road was removed (or buried; reports differ), but there is an awful lot of gorse growing both beside and on the route itself. At points the road looked somewhat eroded, sloping down into the bowl, which raises the question of whether the road will always be open for pedestrians or whether it will go the same way as the old road across Mam Tor in Derbyshire. At other points there was no single track but several little ones, none of them wide enough for, say, a wheelchair; there are also points where the track goes over an artificial steep bank or a sandbar has been built over most of the width of the track (I actually saw children cycle over these when a young girl in a wheelchair was on the other side). Given that the road was a road, it makes sense to keep it open as an accessible track; there are plenty of little paths that require climbing and scrambling, including at Hindhead.

Here’s a video shot just before the tunnel opened, showing what the road used to be like:

A few weeks ago I drove down to Midhurst in Sussex, which as well as being a pretty little town, features a ruined old mansion with a walled garden which, although not spectacular in early April, is likely to be lovely in late May as I was told. You can find the pictures here and the website for the garden here.