Polygamy and being Muslim 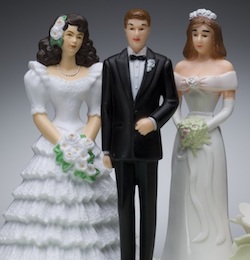 Earlier a Facebook friend (an African-American Muslim woman) posted a status that Black Muslim men should just accept that most Black Muslim women hate polygamy and that “no amount of guilting and shaming is going to change that”. This provoked a big debate about why this is and what it says about Black Muslim women and their attitudes, but there were a number of men insisting that it meant they did not accept what God had made lawful in Islam, and accused them of shirk (idolatry/polytheism, in the sense of thinking you know better than God). The sister who posted the status said there were particular “circumstances that make polygyny worthy of consideration” for African-American Muslim women, but didn’t spell out what these were.

It’s never been any secret that polygamy has been going on in Muslim communities both in the UK and USA “on the quiet” for decades now. The law does not recognise it, meaning that if a man in a multiple marriage dies intestate, at most only one of the wives (the one whose marriage was registered) has any rights; the others are simply regarded as mistresses or girlfriends. It is debateable whether the practice is even legal or not; no government has seen fit to prosecute anyone (the authorities in the USA went after Mormon offshoots, but other crimes were being committed such as tax fraud), but it may be only a matter of time (and one scandal) before they do. Governments in Europe take a much dimmer view, and people have been stripped of citizenship in Germany and Switzerland after being naturalised because their polygamous marriages are deemed incompatible with the way of life of the country they are trying to settle in (or were born in).

It’s also been widely known for a long time, among Muslims included, that women are often opposed to polygamy, especially for themselves. Among Muslims there is evidence of this in even the first generation of Muslims and there are rulings on what a woman can and cannot do to protect herself from it (particularly as a first wife) going back at least to the Four Imams (the originators of the four major schools of Islamic law, who were all second- or third-generation Muslims). Essentially they ruled that a woman cannot stipulate that her husband cannot marry again (i.e. the second marriage is still valid) but can stipulate that if he does, she can release herself from the marriage. So there is no reason for anyone to say that a woman who does not like the idea of polygamy for herself is selfish or arrogant, much less accuse her of thinking she knows better than God or not being a proper Muslim.

We — both white and black Muslims who are converts and not immigrants — come from a culture in which the ideal is a love-based marriage of one man and one woman. If a woman has grown up in a family in which her parents had been married since before she was born, and most of those she knew had similar families and she felt sorry for those who didn’t, because their parents were divorced or one of them had died, she is not going to expect to be one of a man’s four wives (even if he is rich); she is going to expect a marriage similar to her mother’s. In case anyone has not noticed, polygamy is rare even among Muslim immigrant families, not least because they know it is against the law even if it is accepted in the Shari’ah, but also it is not all that common in the country where they come from. So then, why should a woman who converts to Islam expect a lesser deal in marriage than either her non-Muslim sisters or cousins or Muslim women brought up in Muslim families?

More than once I’ve got the impression that there are quite a few male converts to Islam who believe it can “restore their manhood”, and take from it a sense of entitlement towards women (they can develop some quite elaborate theological explanations for this sense of entitlement). Polygamy is only one of the results; you also get men who marry women on the basis of promises that they break after marriage (or had no intention of keeping); in one case, for example, the man (a white convert) promised to allow the wife to continue studying, then demanded that she leave college after they married. It spoke volumes that all the people in that thread lecturing about “shirk” were men (although I have come across women lecturing other women in this vein in the past). On top of this, there is regularly talk of polygamy being necessary to “prevent zina” (out of marriage sex), a consideration which is never used as a justification for polygamy among any other community, which links to the idea that converts from a western background aren’t as pure as other Muslims, and if they are still virgins when they marry, it was not for want of trying. The upshot is that we are commonly expected to settle for less than a born Muslim looking for marriage, whichever our sex or race, and selling it in terms of “reviving a Sunnah” does not take away the insult.

I’m not entirely against polygamy; it is a Sunnah, it is something that is allowed and it is something the early Muslims practised, and it has some uses in this day and age but should not be the norm. Whenever people have tried to argue (on the basis of novel interpretations of the verses of the Qur’an which relate to it) that polygamy is in fact forbidden, I have always opposed that, but men need to respect the fact that Muslim women in this part of the world don’t want to partake in polygamy. Whatever the rights and wrongs, you won’t have a harmonious marriage (or a lasting one) if you strong-arm or trick unwilling women into polygamous marriages when they do not want to be in one.