What is a revolution anyway? 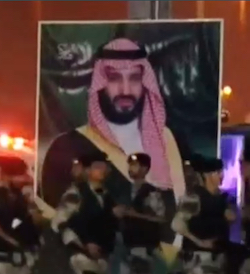 I’ve been seeing trailers on BBC TV for a documentary on the changes being forced upon Saudi Arabia by the new crown prince, Muhammad bin Salman (his father, the actual king Salman is believed to have dementia). The show, House of Saud: A Family at War starts this evening at 9pm on BBC2. The trailer referred to MbS’s having “launched a revolution” and featured an ‘expert’ saying “this leadership has taken steps which the previous leadership, for fifty years, was afraid of taking” which seemed consistent with the western media’s adulation for him and his agenda, with a few progressive changes such as allowing women to drive overshadowing the repression. The truth is that this is not a revolution by any stretch of the imagination.

What even is a revolution? Generally speaking it means where power is seized from outside or below with the intention of making major political and social change. In reality, genuine popular revolutions are rare because the masses rarely have the military might to overthrow an entrenched, repressive state; what are often perceived as revolutions are usually the outcomes of civil wars (Russia), palace coups (Romania) or military coups (Portugal). But an existing ruler within an autocratic system making changes is not a revolution, particularly when they do not even resemble the sort of changes a from-below revolution might make.

I’ve not been to Saudi Arabia and don’t read the Arab media (even in English) much. But what I do know about his changes is that they include allowing women to drive and allowing cinemas to open in the country — both welcome changes for many people, the first especially, but hardly revolutionary. The rest of the Muslim world has allowed women to drive for most of its history, even in very conservative countries such as Yemen; only Afghanistan under the Taliban and the regions controlled by ISIS are exceptions. Similarly, most countries have cinemas. Saudis have TVs and computers and can get films down the line from abroad on both. I’m sure they can get films that the censors will certainly not allow to be shown in cinemas when they open.

It’s widely known that the Saudis loathe al-Jazeera, the nearest thing there is in the Arab world to a free (as in freedom) news source, as do their fellow Gulf autocrats in Bahrain and the United Arab Emirates. To that end they have imposed a blockade on Qatar expecting it to just cave in and close al-Jazeera down and expel a few people the Saudis do not like. They were expecting Trump to back them, but this support has not been forthcoming and Qatar has held out with the support of Turkey and Iran — forming a union of three major tendencies in Islam (Wahhabism in Qatar, Shi’ism in Iran and Sunni-Sufism in Turkey) against the increasingly secularist authoritarianism of Saudi Arabia and the UAE. The Saudis have also locked up well-respected religious leaders such as Salman al-Awdah, in his case for refusing to tweet a denunciation of Qatar on demand from the government, and Saudi TV has been seen cutting off scholars who say that what MbS is doing is against Islam (as with Saalih al-Fawzaan who disapproved of opening cinemas).

So, it rather looks like MbS is starting on another chapter of the history of Saudi Arabia as an absolute monarchy and in some senses this marks a return to the repression of King Fahd’s period as king (during which Shaikh Salman al-Awdah was also imprisoned) with less piety, but certainly not an autocratic modernist like Kemal Atatürk, Reza Shah Pahlavi or Habib Bourguiba (Allah forbid). He is building bridges with foreign powers such as Israel (regarded as hostile even by the British foreign office!) while sowing divisions among Muslims with his vendetta against Qatar. He is no revolutionary, just a different sort of dictator to his predecessors.