Who is really Undateable? 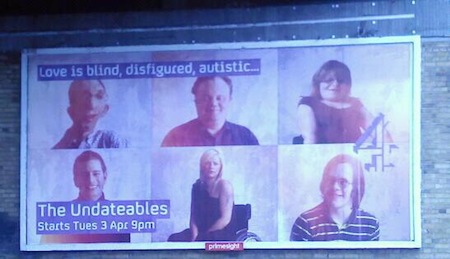 Channel 4 has been advertising a forthcoming TV show titled “The Undateables”, in which they try to hook up various people with disabilities and disfigurements which might have been getting in the way of them getting a date up until then. The advert features six people with different impairments, some of them not noticeable with others more obvious — the one at top right clearly has Osteogenesis Imperfecta or “brittle bone disease” — and the slogan “Love is blind, disfigured, autistic …”. It starts at 9pm on 3rd April. (More: Lisy’s TV Thoughts, Same Difference, Blue Crisps, Lisa Egan @ Liberal Conspiracy.)

I know a number of people with various disabilities and the number who are truly undateable — who have absolutely no chance of finding a partner — are very small, in my observation. I am aware of people who have quite considerable disabilities, including people with severe ME on its own and combined with autism, people with severe physical degenerative disorders such as Ehlers-Danlos syndrome and muscular dystrophy, blind people including one with a high-level spinal-cord injury, and people with severe forms of epidermolysis bullosa (EB), which causes extreme fragility of the skin with a tendency to form blisters and open wounds, who have been able to have relationships and even marriages and children. Quite possibly, the only people who have no chance are those with very severe intellectual disabilities and those with a very low tolerance for human company (such as some autistics and those with very severe ME).

It has been suggested that the reason so many disabled people have no partner is that 70% of people have said they would not have sex with someone with a physical disability. The problem is that some of these people would not have had the opportunity to get to know someone with such a disability, and if a relationship develops, it may lead to them doing something they had expected they wouldn’t. Not all — or perhaps even most — relationships develop with a “date” or an encounter at a night-club or something similar. There are a number of other ways for them to develop: mutual acquaintances, workplace or social contact, social networking sites, introduction agencies and so on, any of which might lead to a more meaningful relationship than a meeting in a club where people are often uninhibited (hence the men who say things like “you’re pretty, but I won’t date a girl in a wheelchair”, and that’s when the girl in the wheelchair has even been able to get through the door).

I write as someone recently diagnosed with Asperger’s syndrome who, apart from a brief period many years ago, has never had a relationship and is still single and living with Mum and Dad. Someone with an autistic spectrum disorder might well have quite exacting standards — compatibility with any hygiene quirks, for example — and might then have mood-swings, anxiety, other mental health problems, and will need someone who is able to deal with these along with perhaps an unusual response to emotional situations and so on. They may also have opportunities to form relationships with others with the same condition, but Asperger’s may make two people entirely incompatible with each other, as one may be unable to cope with the other’s different needs. People with a physical disability may also have different (and more stringent) suitability criteria — someone willing to try different things in the bedroom, to accommodate health crises and hospital stays, to perform care duties when nobody else can or will, not to be put off by stares or hostility, and so on; they also have to filter out “devotees” or people who are specifically turned on by their disability.

For a show that airs in a couple of weeks, there is not much publicity around about the show itself, apart from the billboard ad — there was this article on C4’s website from when “The Undateables” was only a working title, and this page which gives a short explanation and, despite being the page for “series 1, episdode 1”, does not mention how many other episodes there are, who is in it or what their impairment is. The programme enlists the help of “one of the biggest personal introductions agencies in the UK” which uses “pro-active searching methods to find perfect matches”, but they have yet to name the agency and it remains to be seen whether they will deal with the needs that come with each particular disability (as they are very different) with the requisite sensitivity — how often do they deal with clients with disabilities and other special needs? How long will they give the agency, and the disabled participants, to “find love” before abandoning them? A programme on this issue would be welcome, but this format — getting an agency to hook them up with someone over a period of a few weeks — presents the danger of oversimplifying the matter and producing exploitative cheap TV, which seems to be reflected in the poster which has already appeared on various billboards.